“My house is my refuge, an emotional piece of architecture, not a cold piece of convenience.” Luis Barragán

A house is a personal space, where architecture and art go hand in hand in creating an emotional space we call home. The role of art in homes has a history that dates back to the prehistoric times of cave dwellers and cave paintings, and it is steeped in local culture and traditions. India has a rich tradition of such art forms which were used for home decoration. The most common one, and which is still practised is making of the Rangoli. This art of adorning the floor with rice flour and colours, is considered auspicious and also gives an opportunity to the individual for expressing creativity, and is a wonderful and positive way to start the day!

The following are some more styles of Indian Art forms which were used for decorating homes and are a part of the tradition, culture and identity of that group of people.

This art form dating back to 2500 to 3000 BC, has gained popularity after its revival in the seventies. Indigenous to the tribes of Warli and Malkhar koli tribes of Maharastra, this tribal art, which depicts the scenes from their daily life, like hunting, dancing, sowing and harvesting in rhythmic patterns, was usually drawn by women for adorning the walls of their huts. These seemingly simple patterns are high on symbolism, like the circular patterns depict circle of life, the triangular shape comes from their observation of the mountains and trees and the square indicating a sacred enclosure or a plot of land. 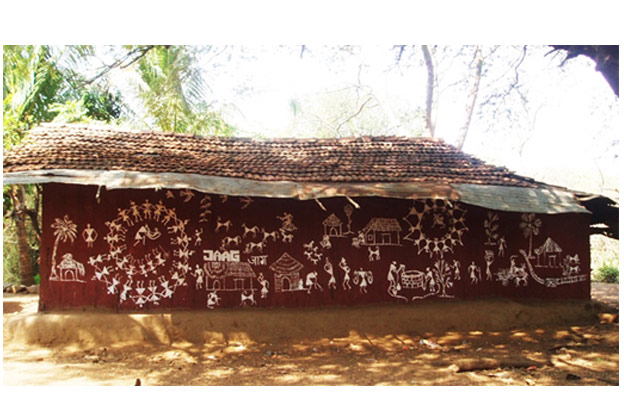 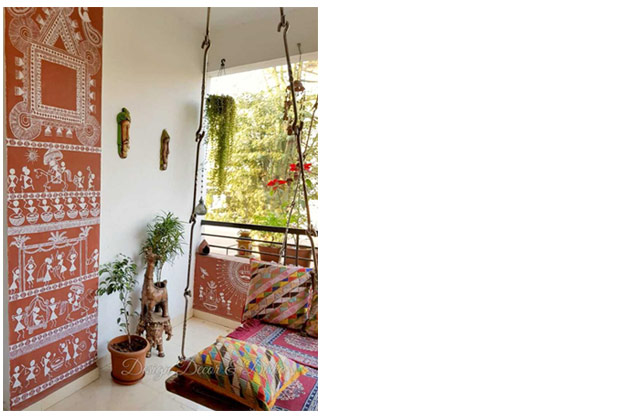 Bearing a likeness to the aboriginal art of Australia, this tribal artform dates to the pre-Aryan era. It is made by the members of the Gond tribes, one of the largest tribes of India. Predominantly settled in Madhya Pradesh, small pockets of settlements of this tribe are also seen in Andhra Pradesh, Maharashtra, Chhattisgarh and Orrisa. The themes drawn are largely taken from nature, but some are inspired from Indian mythology. Steeped in symbolism, this artform has a lot of movement and colour with the images intricately filled with small dots, dashes and other patterns. 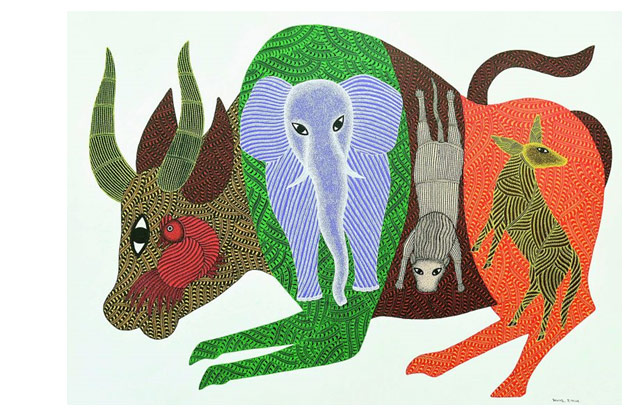 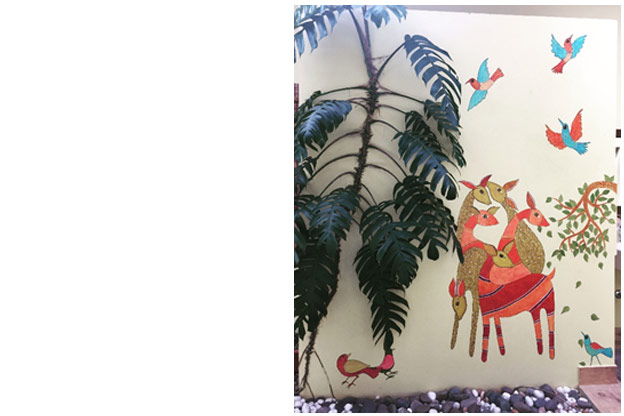 Bhil art is again a tribal artform, made by the Bhil tribal community, native to western and central India. The themes of the painting depict the day to day life of the people, animals and nature. Originally drawn on walls, the distinctive feature of this art is the multi-coloured dots which are used to fill up the pictures. The style of these dots also determines the character of the finished drawing and each artist is known to have a signature style of putting these dots and is recognised by it. 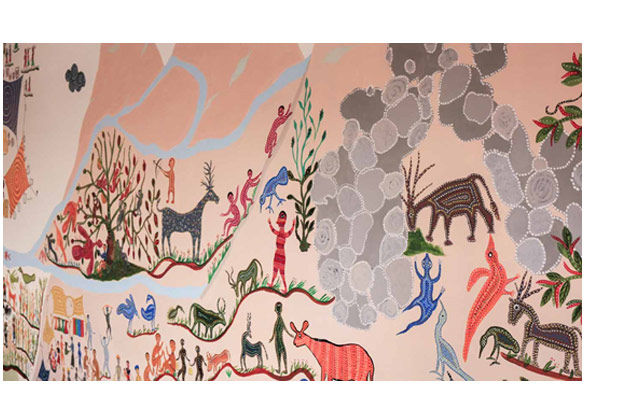 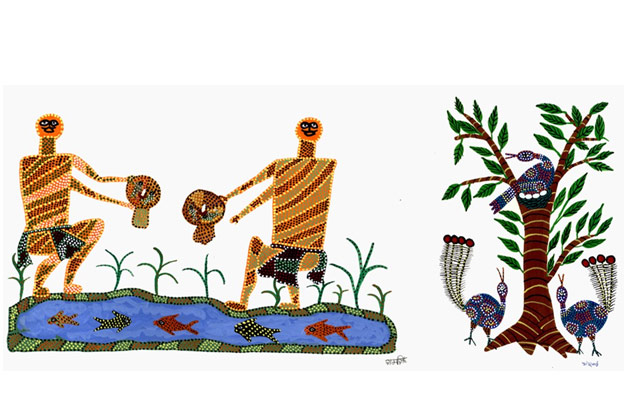 This 2500 year old folk art form from Madhubani district of Bihar is extremely colourful and is characterised by prominently outlined figures with big fish like eyes and pointed noses. Made on the walls of the houses using natural colour dyes, this art form was accidently discovered by a British colonial officer in 1924, while inspecting earthquake affected houses of this region. These drawings besides depicting nature, also draw inspiration from the stories of the Ramayana. As the folklore goes, King Janaka of Mithila, is said to have asked an artist of this region, to capture the wedding of his daughter Sita to Prince Rama. 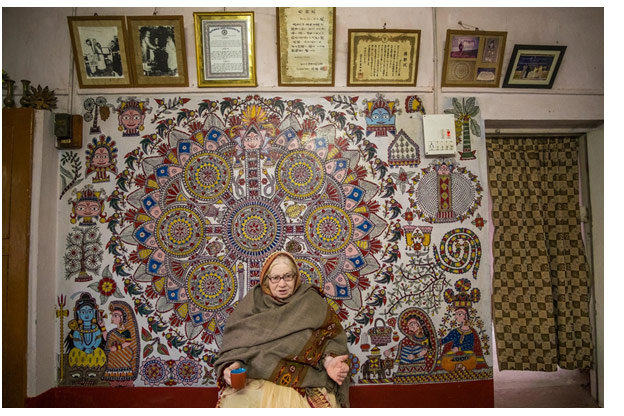 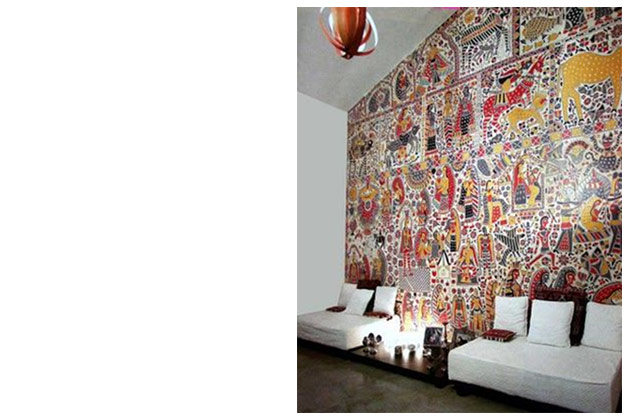 The scroll paintings of India are a rich tradition. Associated with the act of story- telling, the local artists drew these scrolls for the bard or the story teller, depicting scenes from the stories to be told. Cheriyal is one style of scroll painting from Telangana and is drawn in a narrative style, almost like a comic book, depicting stories from Puranas. 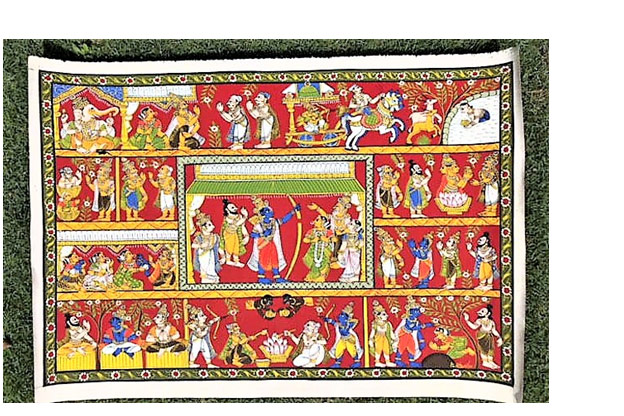 Scroll paintings style from Orrisa and West Bengal is known as Patachitra and often depicts stories of Lord Jagannath. Stylistically very different from the Cheriyal paintings, these scrolls have a very intricately drawn floral borders..

This style of art gained popularity because of the patronage given by the Golconda rulers and was used to adorn the canopies and the backdrop for the deity in the temple. Intricately done using a pen and natural vegetable dyes, this has a unique stylistic look and earthy colour palette. 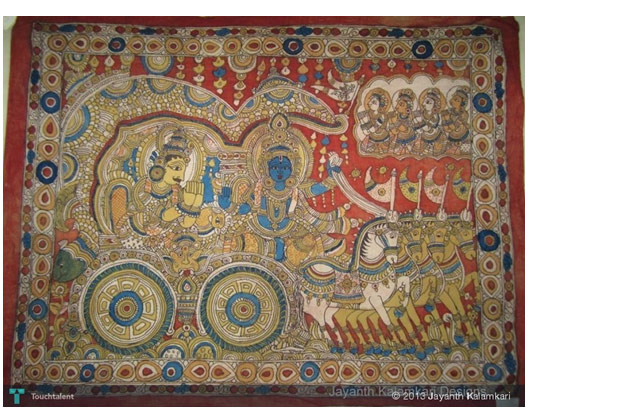 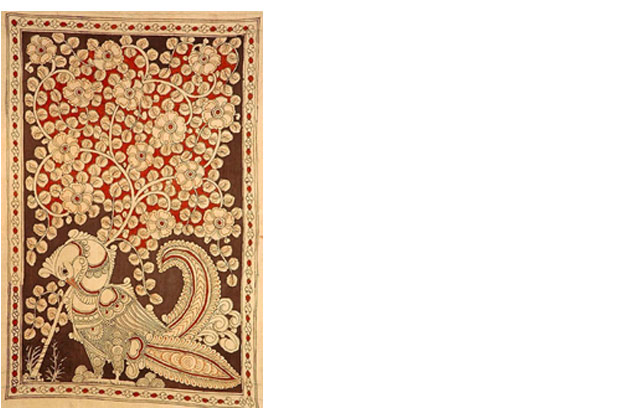 This form of art is seen in Kerala temples dating as far back as the 9th century. Drawn on the wall, this mural art uses natural dyes. This mural work was not restricted to the temples alone but has been seen decorating the walls of the Churches of that time. We have barely scratched the surface when it comes to Indian traditional art forms. There are still the Tanjore paintings, the Phad paintings, the Kalighath paintings, the Pinguli paintings, the Miniature paintings and we have not yet touched the traditional relief works and weaves, etc. The Indian art traditions are so rich and varied that each one can find something with which they make an emotional connect and bring it into their homes! And by doing so, one not only helps in encouraging the local artists but also in keeping this rich heritage alive for generations to come.